The Hiroshima Day Committee is a coalition of groups from unions, peace groups, and other social change groups.

At present the people who have been elected to positions on the committee are: 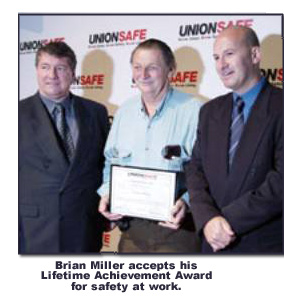 For many years Brian Miller of the CFMEU was the energetic representative of his union on the Hiroshima Day Committee. He made a name for himself in the peace movement in Sydney for the ‘stages’ that he constructed for Hiroshima Day rallies and other peace events.

Brian was a legend in the building industry, having worked for the union for over 30 years. He participated in many union campaigns for improvements in wages and working conditions for building workers. However, his most outstanding contribution was improving workplace safety. Brian never compromised with the developers and contractors in respect of safety.

In addition to his union work, Brian participated in the broader community with social and political campaigns. He co-ordinated volunteer building workers to assist in the rebuilding of Darwin after Cyclone Tracy and volunteer rebuilding efforts after the Nyngan flood and bushfires of 1993/4.

Brian was also a long standing peace activist, being the motivator behind over 150 major construction projects in Sydney being voted “peace sites”, including Darling Harbour, the QVB and the Entertainment Centre.

CFMEU State Secretary Andrew Ferguson paid tribute to Brian Miller: “The building industry is a dangerous place – but Brian’s tireless work has made it considerably less dangerous than when he started. It’s fair to say that Brian Miller’s work saved many lives.”

Babs in 2005 has decided to retire as treasurer of the Hiroshima Day Committee. We are not sure how long Babs has had that position, it seems that she has always been there.

In recent years Babs has been plagued by some medical problems, which have curtailed her many activities.

The Hiroshima Day Committee thanks Babs for her many years of sterling service as treasurer of the committee.